LOWELL – The city is making progress on a 100-acre park project on the west side of town.

A new inclusive playground and trail connecting the Razorback Greenway are among the latest additions, according to Karen Davis, the city’s director of community development.

The first phase of the project, which focused on the park’s northwest corner, also included a fire station, farmers’ market and restrooms, Davis said.

The city’s second fire station was the first building constructed, joining a veterans memorial, walking path and disc golf course in Bellview Street Park and west of Interstate 49, a- she declared.

The first farmers’ market at the new pavilion on November 12 will also be Mudtown’s last market of the year. The market took place at Ward Nail Park near McClure Avenue, she said.

The playground is already being used by families, according to Davis.

The trailhead guides walkers, runners and cyclists east and then north past the Matrix Racquet Club to a connection point with the Razorback Greenway at Mills Lane.

Davis said she hopes construction of Zion Church Avenue along the north edge of the park will be complete by next year. The road will eventually stretch from Bellview Street to Goad Springs Street, according to the city’s master plan.

A grand opening with multiple dedications to the park will be announced later this fall, she said.

The couple donated the land on the condition that the property be used for the public good, whether through public amenities or non-profit organizations, Davis said.

ASBL AT THE PARK

Two of the organizations have since changed their plans. None have started construction of the park.

The city offered land to nonprofits for $1 a year.

The Office of Human Concern has almost completed the design phase and has started raising funds for its installation, according to executive director Susan Moore.

The nonprofit distributes food to homebound people at its seven senior centers through its Meals on Wheels program.

A central kitchen to prepare meals for the program will be part of the planned facility, Moore said. The building, which would be on the southwest corner of the park, will also have offices for around 30 staff, she said.

The covid-19 pandemic and rising construction costs were factors in delaying the project, she said.

The organization has set up funding for $1 million in kitchen-related equipment as well as funds for construction, according to Moore. She said foundations are often more willing to help defray nonprofit equipment costs than fund a new facility.

The Office of Human Concern hopes to innovate and begin construction in the spring, she said.

NWA Space is still in the fundraising phase for its estimated 100,000 square foot science center and planetarium that would occupy the center of the park.

Katherine Auld, founder and chair of the board of NWA Space, said in June that the nonprofit had raised about $50,000 of the $70 million cost of the project. The nonprofit is trying to build community engagement, an important factor in receiving some of the grants NWA Space will need during the fundraising process, Auld said at the time.

The Northwest Arkansas Food Bank broke ground on a property elsewhere, according to Julie Damer, director of marketing and communications. The organization held a groundbreaking event this summer at the southwest corner of Pleasant Grove Road and Honeysuckle Street for a new 82,425-square-foot center to replace its June Self Drive location in Springdale.

The nonprofit hopes to open the facility by the end of 2024, Damer said.

The Red Friday project no longer plans to build in the park, said chairman Michael Whitehead.

According to Whitehead, the nonprofit that supports veterans has moved forward with a property in the Gravette area. Funds for a construction project can be difficult for nonprofits to raise, he said, though he’s always open to discussing the concept with the city.

The city will approve a master plan before arranging the rest of the Johnson Park project into phases, according to Davis.

Residents responded to the master plans for three public parks – Kathleen Johnson Memorial Park, Ward Nail Park and McClure Park – during a public comment period this summer. Those comments were sent to the engineers, and the city council will decide which of them will incorporate into each park’s master plan, Davis said.

The council could give its opinion and make decisions on the master plans at its next meeting in November, she said.

The draft concept plan for the 100-acre park includes the addition of interconnecting trails and walking loops, 10 baseball diamonds of various sizes, a concessions stand, three soccer or ultimate disc golf fields, three soccer fields of different sizes, a bicycle course, two ponds with fishing piers, a community garden, a paddling pool and lawn and two car parks with a total of 900 spaces.

Fields in the center of the park for football, disc golf and soccer will be the site of the NWA Space Science Center if that project goes ahead with construction, according to Davis.

Requests for tennis and pickleball courts at Johnson Park as well as a dog park have been received frequently from residents, she said.

At its August 1 meeting, the Planning Commission recommended additions to the plan such as softball fields, impermeable parking lots, trees, a dog park, family restrooms and a screen at the community garden.

Improvements to two other public parks in Lowell are also underway.

Funds for the installation of a splash pad at the 72-acre Ward Nail Park, located south of McClure Avenue and west of Old Wire Road, were approved by the city in August. The city also plans to widen McClure Avenue along the northern edge of the park, Davis said.

Updated playground equipment for McClure Park behind City Hall has also been ordered, she said.

Playground equipment is seen at the newly opened first phase of the 100-acre Kathleen Johnson Memorial Park in Lowell on Friday. The first phase focuses on the northwest corner and includes a fire station, farmers’ market, inclusive playground, restrooms, and a trailhead with a trail connecting to the Razorback Greenway. Visit nwaonline.com/221023Daily/ for today’s photo gallery. (NWA Democrat-Gazette/Andy Shupe) 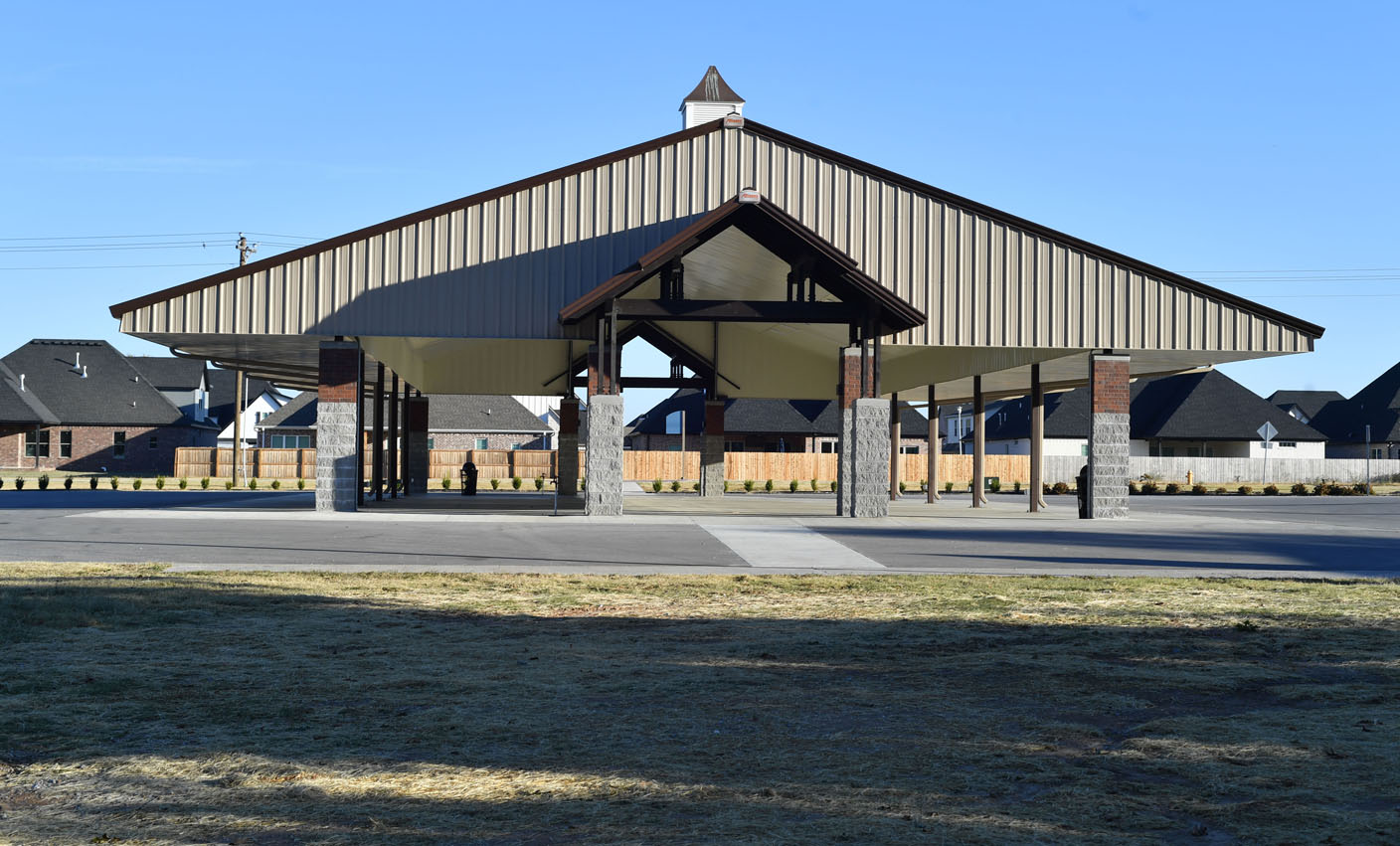 A large pavilion stands Friday at the recently opened first phase of the 100-acre Kathleen Johnson Memorial Park in Lowell. The first phase focuses on the northwest corner and includes a fire station, farmers’ market, inclusive playground, restrooms, and a trailhead with a trail connecting to the Razorback Greenway. Visit nwaonline.com/221023Daily/ for today’s photo gallery. (NWA Democrat-Gazette/Andy Shupe) 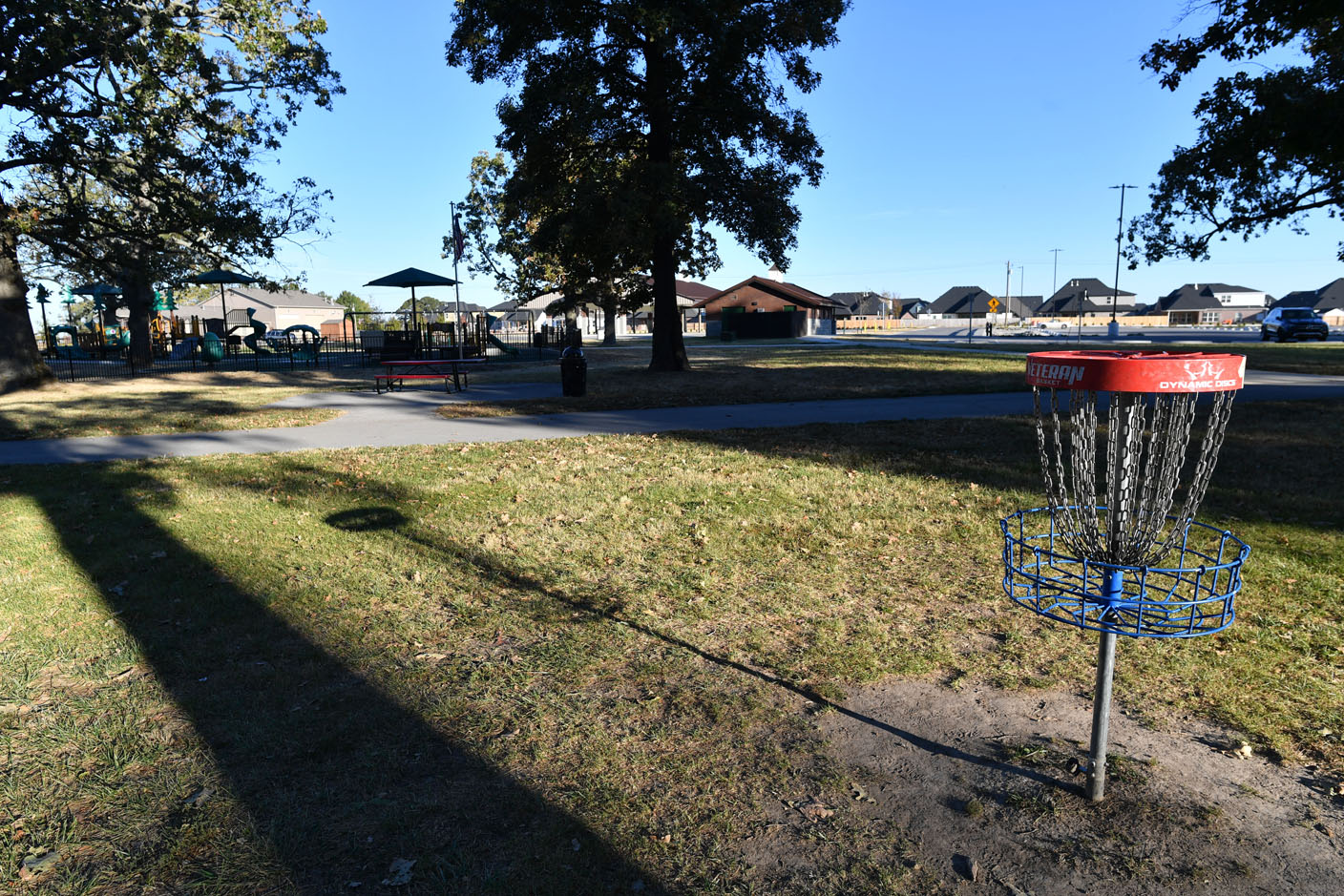 A disc golf hole is being held Friday at the newly opened first phase of the 100-acre Kathleen Johnson Memorial Park in Lowell. The first phase focuses on the northwest corner and includes a fire station, farmers’ market, inclusive playground, restrooms, and a trailhead with a trail connecting to the Razorback Greenway. Visit nwaonline.com/221023Daily/ for today’s photo gallery. (NWA Democrat-Gazette/Andy Shupe) 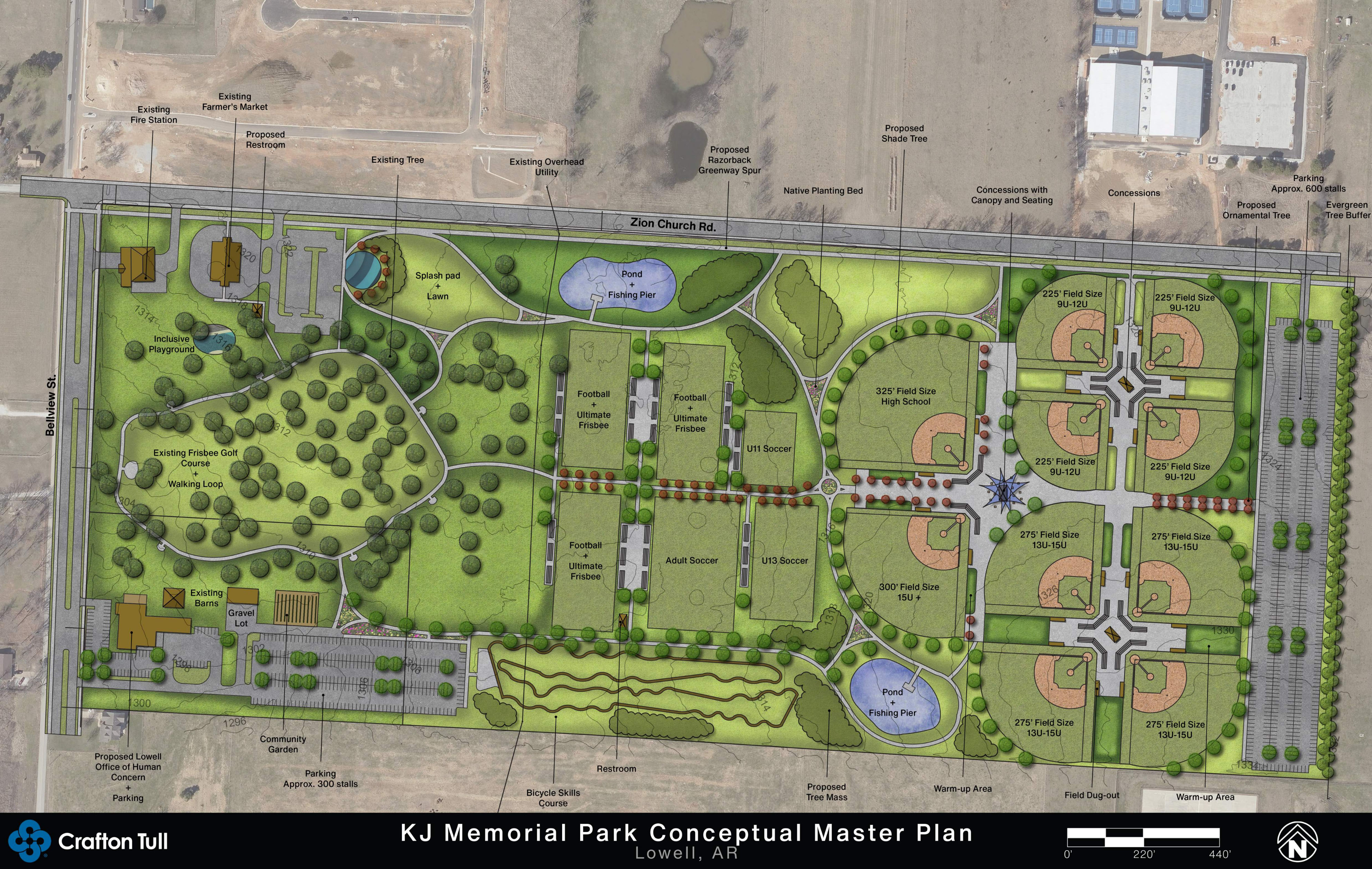 Rendering of a draft concept master plan for Kathleen Johnson Memorial Park in Lowell. Residents and members of the Planning Commission submitted comments on what they would like to see in the park. The city council will review the plan at one of its upcoming meetings, according to Karen Davis, director of community development.