Sign for Chutes and Ladders playground coming to Reservoir Park

Harrisburg is finally putting the shovel down on a construction project to make Reservoir Park more enjoyable for residents.

On Monday, city officials opened the Chutes and Ladders Playground, which will replace outdated and underutilized equipment at Allison Hill Park.

“We all loved playing the board game Chutes and Ladders when we were younger, didn’t we?” Harrisburg Mayor Wanda Williams said at the inauguration. “Soon our children will be able to live it and experience it. The work we are starting here today will lead to the improvements needed for this entire park.

The million-dollar playground project has been in the works for years, but will finally start to take shape this year. It is part of the Harrisburg Reservoir Park Master Plan, which aims to increase traffic and interest in the 87-acre park. 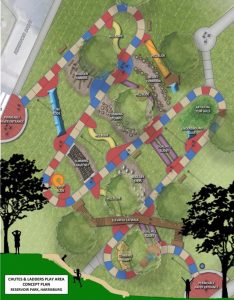 First, the city will replace existing playground equipment with new attractions. The playground will be based on the popular board game “Chutes and Ladders” and will allow visitors to engage in a life-size version. The city plans to complete the playground by August.

In a later phase of construction, the city will create additional parking, add a “Tot Lot” play area for young children, plant trees and increase walkways in the park.

The city is currently applying for grants to help pay for the next phase of the project.

The Harrisburg City Council recently voted to allow the city to apply for several park-related grants, including one with the Pennsylvania Department of Conservation and Natural Resources’ C2P2 Park Rehabilitation and Development subprogram. If granted, the funds would support phase two of the Reservoir Park project.

The city will also apply for a DCNR grant to fund the development of a Harrisburg City Parks Master Plan. According to city officials, this would help create a vision for city parks and help apply for future grants.

For more information on the city’s parks, visit their website.

If you like what we do, support our work. Become a friend of TheBurg!