BURLINGTON, PEI — When Christena Compton’s husband asked her if she wanted to buy the Burlington go-karts and amusement park, she laughed like a joke.

Still, the couple went to view the property and what started as an offhand comment quickly turned into a more serious discussion. in June 2022, Compton was preparing to open the park to the public for the first summer since 2019.

“It’s scary,” laughed Compton, who has never owned a business before. 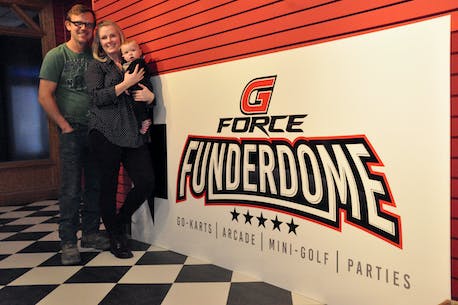 In late 2020, Compton’s husband Scott MacDonald was at the park helping a colleague install an oil tank and noticed the property was for sale. MacDonald’s colleague suggested the property – including the house next door – would be an ideal place to move. The couple were living in Summerside at the time but were looking to relocate.

“I never took (anything). I thought it was all a joke,” Compton said. “But he wanted to come back to the country, I wanted to get out of town.”

By December 2020, they had moved into the Burlington home.

By February, the deal was done, and Compton could officially call herself the owner of the nearby park.

“She told me, and I didn’t believe them,” said Kayla Smith, Compton’s daughter and new park superintendent. “She’s not very social, so I’m like, ‘Aren’t you going to do that?'”

Although Compton purchased the place, she initially had no intention of operating a park and opening it to the public. It had operated as an amusement park since at least the 1970s. On the contrary, she wanted it to be enjoyed by her grandchildren.

As this summer approached, Compton was bombarded with people messaging on Facebook or stopping by the property, asking when or if it would open.

“It was unreal,” Compton said.

In the fall of 2021, Smith offered to run the place for her mother if she decided to reopen the business. Compton accepted the offer and they got to work – and there was a lot to do.

On the one hand, the bumper boats needed to be repaired; on the other hand, the Go-Karts needed new breaks and new seat belts.

“The canteen was a disaster,” Smith added.

The business started opening on weekends in early June and, from the 25th, also extended its opening hours during the week.

The effort has proven to be worth working behind the scenes, especially considering how busy the park has been so far.

“Kayla found a review on Facebook a few days ago raving about the place,” Compton said. “So that feels good. We did something good,” she laughed.

Meanwhile, Smith is excited to see how the summer will pan out and already has plans for the future of the park. She is thinking in particular of adding activities for the youngest, or perhaps installing a swimming pool.

In the future, Smith and Compton also hope to expand the canteen to include more than snacks, and perhaps add a deep fryer.

Overall, Smith and Compton are both hoping for a busy — and enjoyable — summer and look forward to the years to come operating their own amusement park.

“I just hope to have fun,” Compton said, “and (I hope) everyone does.”

Kristin Gardiner is a reporter for the SaltWire Network in Prince Edward Island. @KristinGardiner

Mehwish Hayat likes to ride a bike in an amusement park, watch the video